I want to be a race car driver on a budget so what do I buy? A ’79 Volvo 242. Few people know that Volvo won the European touring car championship in 1985 with a 242 turbo. I wanted to get a turbo but I came across this ’79 NA car in Portland with 260k miles on it and snatched it up. My plan at the time was to keep it NA and race it and see how it handled. If all went well, I would do some engine and suspension work, and try to make it competitive. Right off the bat I got sidetracked from performance mods. I was at the junkyard pulling parts off another ’79 242 when I spotted a BMW Bavaria that was totally wrecked. The interior however, was spotless and really looked cool. I measured it out and decided to try an interior swap for the BMW. The back seat needed some small snipping and cutting to fit, and I was able to mount the front seats onto the existing Volvo hardware after I bolted on some 1/8” plate to the bottoms. When I did the seats I also swapped in a custom cluster from Roger Patricio and a new dash that I got at V&B auto parts in Portland ( a guy who has a warehouse full of old Volvo parts, and the business is for sale by the way).

So once the interior was in I decided to enter her in some local SCCA solo events. What a blast, I won first in class the opening weekend and ran second the next two events. So the Volvo really handled well, but more importantly I really enjoyed driving it. I’ve just really enjoyed the feel of the car from the moment I got it. So, along the way I have replaced the alternator, removed the AC, replaced the cooling fan, clutch, and wiper sprayer pump. But right now I have some lingering issues. The water pump is ready to go, the cooling fan is still really loud, the wiper motors only work on high, my radiator is leaking slowly, all the suspension bushings are shot, my front wheel bearings need replacing, and there is a huge rust hole in the spare tire well in the trunk. Oh yeah, it is also totally gutless.

So my plan is to swap in a ’93 or later 940 turbo motor. I will probably just do a straight swap since I’m running out of time before the race season starts up again. But ultimately I want to put a 16v head on it, with new rods and pistons. I am also planning on a major suspension mod. I haven’t decided on springs yet, probably either King springs or Eibach springs, chassis braces top and bottom, panhard and torque rods, Bilstein HD’s up front, Konis in the back. I already have an IPD sway bar up front and will probably put the back one on after I get the other parts replaced and see how it feels. I’m also looking for some wheels if anyone has some suggestions. They will be for autocross so 15/16×8 or wider. So, I would love some suggestions on the wheels, and I could really use some help tracking down a 940 turbo parts car, there seem to be none in Montana. And I also have flat hood, lights, grill, doors, rear windows and trunk lid off a ’76 242 that are for sale or trade, problem again is that I am in Montana, but . . . 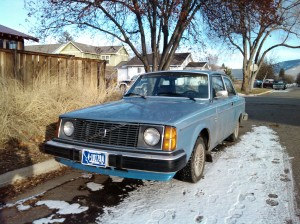 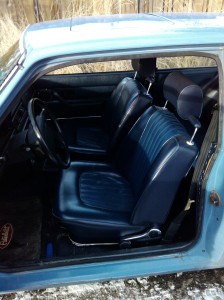 This entry was posted on March 30, 2012 by Lauren Varney. It was filed under Uncategorized and was tagged with volvo, volvo 240, volvo242.